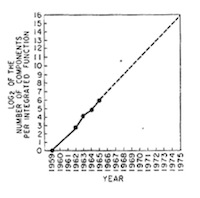 Moore’s Law (transistors per chip) and Hendy’s Law (pixels per dollar) have been useful predictors of where processing power and digital photography were going. Something similar would be really useful for 3D printing. I tried to plot a law for the quality of print per dollar of 3D printers for an article I have been working on for the McKinsey Quarterly, but I don’t have the data. What I want to plot is something along these lines: quality (lower microns etc. + multi-materials) improves at the same cost every X months/years. Plotting this would help people plan for, and benefit from, the disruption of 3D printing.

I need help to do this: I have setup a Google spreadsheet that anybody can contribute data points to at https://spreadsheets.google.com/spreadsheet/ccc?key=0AvV-pHeoX7ZYdG1OQkVNRVFnTEZLd3NoVUdHMTBIS2c&hl=en_US. The data I need are the following:

At least one machine per year (where possible, at the low end of the market) showing:

It will also be important to have the price per unit (this may include supporting equipment necessary to operate the machine). In general, the machine should be at the lower price end, rather than a high price innovation.

This is intended to gather enough data to develop a rough starting point. In an area with such diverse technologies (In the first three years of the 1990s alone, Fused Deposition Modeling (FDM), Solid Ground Curing (SGC), Laminated Object Manufacturing (LOM), Selective Laser Sintering (SLS), and Direct Shell Production Casting (DSPC) were commercialized!), it will be difficult to come up with a sensible graph – as Joris Peels rightly Ed Grenda warned me.

The best example of where this kind of predictive guess work is Gordon Moore’s 1965 article in Electronics, v. 38, No. 8. Moore, then at Fairchild Semiconductor, plotted the growth in chip complexity from 1959 to 1965 and projected that the number of transistors per integrated circuit would double every 12 months.

“If we look ahead five years, a plot of costs suggests that the mini- mum cost per component might be expected in circuits with about 1,000 components per circuit (providing such circuit functions can be produced in moderate quantities.) In 1970, the manufacturing cost per component can be expected to be only a tenth of the present cost.

The complexity for minimum component costs has increased at a rate of roughly a factor of two per year (see graph on next page). Certainly over the short term this rate can be expected to continue, if not to increase. Over the longer term, the rate of increase is a bit more uncertain, although there is no reason to believe it will not remain nearly constant for at least 10 years. That means by 1975, the number of components per integrated circuit for minimum cost will be 65,000.”

Moore updated this in 1975, correcting predicting that from that year on the number of components per chip would double every two years.

Another useful example is Hendy’s Law, which established a consistent trend in digital camera technology toward higher pixel count per dollar in 1998. Barry Hendy, then Manager for Kodak Digital Imaging Systems for the Asia Pacific Region, plotted the pixel count of Kodak’s most basic models in Australian Dollars. He used pricing data from 1994 onward, and plotted the prices on logarithmic Y axis to show the linear rise per year.

With only four years data, he plotted the future. 3D printing will create massive opportunities. But it will also disrupt many businesses. To get the best out of this transition we need to be able to plan for it properly. So please contribute any data you can find to https://spreadsheets.google.com/spreadsheet/ccc?key=0AvV-pHeoX7ZYdG1OQkVNRVFnTEZLd3NoVUdHMTBIS2c&hl=en_US.

Thanks to i.materialise, Fabaloo, and Ponoko for posting this on their blogs.